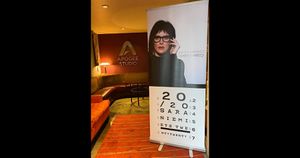 twentytwenty, by Sara Niemietz, was recorded in 2020, on February 27th and 28th, before live audiences at Apogee Studios in Santa Monica, California.[1] The seventeen track live album features some previously released songs that have evolved with inputs from additional band-mates and the album debuts four new unreleased songs.[2][3]

The band reunited on the the eve of the album release (October 15, 2020) for the first time since the live recording sessions. Two online performances were live-streamed with video provided by Veeps.com. Ty Bailie filled in for Andrew Kesler on keys as the US Canadian border remained closed at that time.[7] The release event consisted of two online performances to accommodate international time zones and viewership. The event(s) were hosted by Feinstein's at Vitello's in Studio City, CA without a live audience present due to lingering Covid-19 concerns.[8]